Winners commemorated at House of Lords

The Annie Williams Ensemble Prize was awarded to St Clement Danes Church of England Primary School in Westminster.  This prize acknowledges the commitment and focus of the entire group, mutual support during rehearsals and a culture of respect for the performances of others.  Year 3 at St Clement Danes demonstrated this in their participation of this year’s project.

The Annie Williams Social Media and Engagement Prize was awarded to Salusbury Primary School in Brent.  Salusbury World was able to include children from a number of different year groups in the project and had a very visible Social Media presence on their Twitter feed. 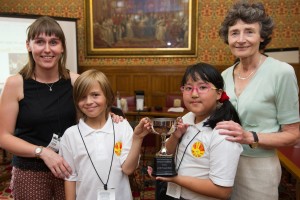 Baroness Morris of Yardley presents Catherine Tierney, class teacher and pupils Shae Hynes and Rash Pun from Goldbeaters Primary School in Barnet with the Annie Williams Prize 2016 at the House of Lords

And the overall winners of the Annie Williams Prize 2016 are Goldbeaters School.  Catherine Tierney, the class teacher, has participated in the Primary Shakespeare project for a number of years and has built on her experience and is now bringing innovation of her own.  This included the introduction of a ‘rehearsal diary’ in which the children collectively discussed the successes and setbacks of each of their sessions and what they needed to do to progress.  This strategy is very valuable as it makes the group responsible for their behaviour, it empowers children to take charge of their own learning and encourages them to see constructive criticism as a way of improving, not a fixed judgement of ability.  Work also broadened out to often include the whole school including: a maths project where Year 4 created Macbeth flags, Year 2 worked on designing crowns, Year 3 created a set of masks for the witches and Year 5 did some creative writing.

Congratulations to the winners and to every school that took part in the Primary Shakespeare Project this year.

In 2016 the Primary Shakespeare Company worked with almost 1,300 children from 43 classes across 36 schools in seven London boroughs.  It introduced these children to the magic of Shakespeare, using Macbeth as their inspiration.

We are pleased to announce the launch of Perspectives, a report that collates the responses of Arts organisations, special schools and Music Education Hubs to questions on what makes good and effective partnerships.  The research and report was produced for John Lyon’s Charity by the Charity’s Adviser, Jean Carter.  Jean has many years’ experience working in the Arts sector, most recently as the head of the Tri-Borough Music Hub until 2014.  The report outlines – in the words of those working in each of the different sectors – what factors matter to them most in delivering Arts projects: what their priorities are, what they perceive the barriers to be and what they see as the main roles of the different members of the partnerships.  It is designed to inform those working in the area and to give confidence to those who have not yet engaged in the process.

Perspectives was launched on Tuesday, 28 June 2016 at Lyric Hammersmith.  The event was attended by over 70 representatives of Arts organisations, special schools and Music Education Hubs in the Charity’s Beneficial Area.  There were also representatives from other funders interested in working in this field.

Main Grants Fund, Schools in Partnership Fund
The May/June funding round is now closed.  The next available funding round is in October/November.  You should send your Stage One proposals to the Charity by the beginning of August at the latest if you would like to be considered for this round.

We are pleased to learn that DreamArts won ‘Outstanding Organisation’ award at this year’s Westminster Community Awards!  DreamArts are an outreach arts organisations which works with young people aged 7-25 from Westminster and surrounding boroughs.  It uses a variety of art forms to help its beneficiaries learn new skills, realise their potential and express themselves creatively. Congratulations to all involved, and to all the other shortlisted nominees, a number of whome are also JLC grant recipients!