As with many grant-giving trusts, John Lyon’s Charity has a very old and distinguished history. Whilst we have only been distributing grants since 1991, the Charity and its endowment is still constituted on the basis of the 16th century Royal Charter.

Who was John Lyon? 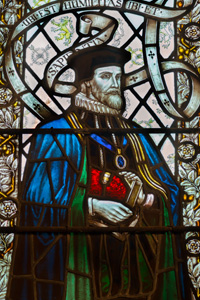 John Lyon in the chapel at Harrow School

John Lyon was a yeoman farmer from the village of Preston in Harrow.  In 1572 he was granted a Royal Charter by Elizabeth I to found a free grammar school for boys: Harrow School.  He lies buried with his wife Joan in St Mary’s Church, Harrow on the Hill, close to Harrow School.

The Charter anticipated that John Lyon would endow a trust for the purpose of maintaining the two roads between London and Harrow, now the Edgware and Harrow roads. In 1578, John Lyon provided an endowment in the form of a farm of some 48 acres in the area now known as Maida Vale for that purpose.

What is John Lyon’s Foundation

John Lyon’s Foundation consists of Harrow School (the original school), The John Lyon School (established in 1876 as a day school to provide education for boys from the local community) and John Lyon’s Charity.  It is governed by the Keepers and Governors of the Free Grammar School of John Lyon, the Corporation that was established by the 1572 Charter.

Where does John Lyon’s Charity fit in? 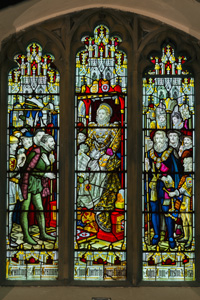 A window in St Mary’s Church, Harrow on the Hill, depicting the granting of a Royal Charter by Elizabeth I.

For over 400 years the income from the estate in Maida Vale went to the various authorities that were responsible for the upkeep of the two roads.  In 1991, the Charity Commission scheme came into effect giving the Governors discretion to apply the income for charitable purposes for the benefit of the inhabitants of the boroughs of Harrow, Barnet, Brent, Camden, Ealing, Hammersmith & Fulham, Kensington & Chelsea and the Cities of London and Westminster – the boroughs served by the two roads. The Charity gives grants to support children and young people in our Beneficial Area, continuing the legacy of our founder, John Lyon.

Who governs the Charity?

The Governors of the Foundation are the Trustee of John Lyon’s Charity.  They have appointed a Grants Committee to oversee the Grants Programme and recommend awards for their approval. John Lyon’s Charity is a separate registered charity and is independent from the two schools.