I was thrilled when in September, we received an invitation from John Lyon’s Charity to meet the trustees at their Grants Committee meeting and talk about our e-Safety project. Rather than presenting solo, I thought this would be a wonderful opportunity for our student CyberMentors – the real stars and driving force behind our e-safety initiative – to share in their own words their journey and experiences, and the impact that the project had made.

As the day drew closer, six of our students met regularly at lunchtime and during breaks to develop and rehearse their presentation, whilst applying the skills they had acquired as part of their CyberMentoring training; communication, working as a team, assigning roles and responsibilities, motivation, time-management, active listening, organisation, and contingency planning to name a few. What I realised as I watched with great pride, was that in addition to graduating as e-safety ambassadors and peer-mentors – equipped with the knowledge and skills to support peers around online safety and bullying – that as individuals, they had grown considerably in confidence and maturity, having developed both valuable and transferrable life skills which they were now putting into practice.

The 14th October arrived, and as we walked to the bus stop on Ruislip Road, accompanied by our headteacher, Mr Cramer, they chatted excitedly about meeting the faces behind the renowned John Lyon’s Charity that had funded their project. As a reward, Mr Cramer had kindly organised a cultural day around the visit in recognition of their hard work, taking on the role of our London tour guide. First stop, Sloane Square, where we gathered our bearings in front of the Venus fountain and were treated to the beautiful autumnal surroundings, discovering ‘Made in Chelsea’ territory – the Royal Court, trendy cafes and boutiques and of course a history of Chelsea football club, Mr Cramer’s favourite topic. Making our way through Peter Jones, we then headed towards Kings Road for some window shopping, taking in the new season trends and inviting scents from Jo Malone. We finally arrived at 45 Cadogan Gardens, where we were warmly greeted by the team and escorted to the boardroom. 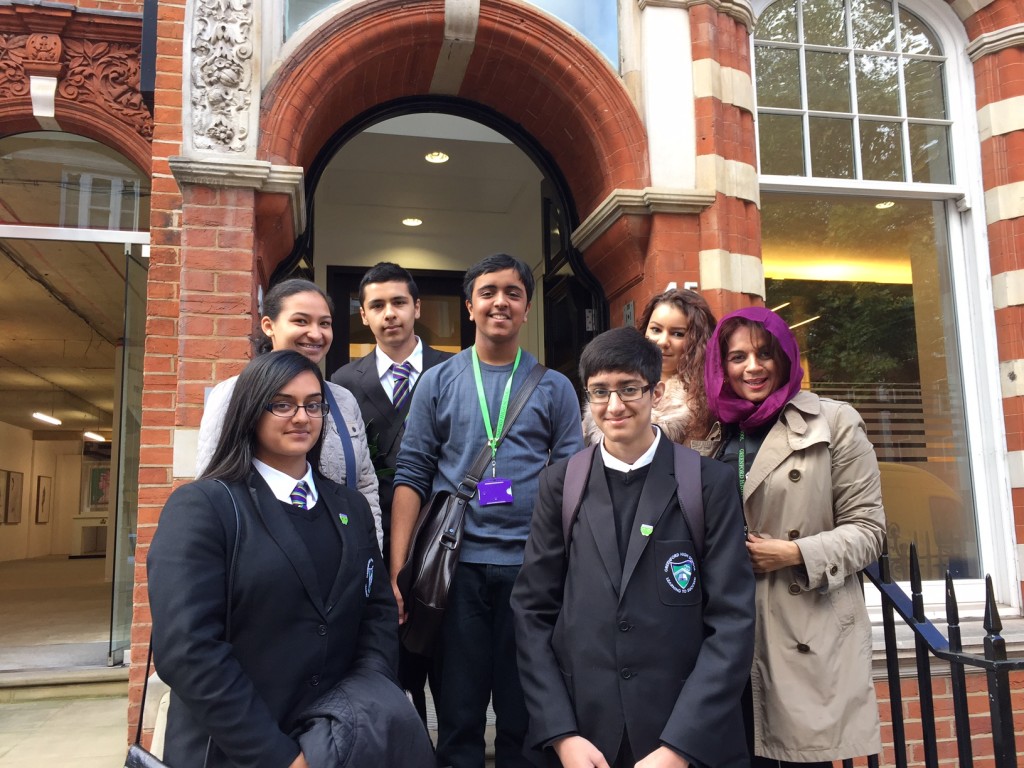 Our students then presented their work on CyberMentoring and e-safety to the trustees and board. Although initially nervous, they did the school proud as they explained their project, funded to the tune of £38K by the Charity, to empower students at Greenford High School to tackle problems like cyberbullying by creating a group of peer-mentors and e-safety ambassadors to deal with the issues and change the culture.  Thanks to the funding, our CyberMentors now train many other schools in these techniques, as part of a whole school approach to e-safety, cascading good practice from one school to another. Nourished after a delightful lunch, we continued our cultural tour, capturing the creativity and imagination of Chanel at the Saatchi Gallery to see their Mademoiselle Privé exhibition, before returning back to school – a wonderful day!

We would like to thank John Lyon’s for their hospitality; for listening to us and providing valuable feedback, for supporting the school and, most of all, for helping to empower our students.