This Programme Area was developed to support initiatives which educate, equip and support young people in deadline with the many challenges and crises they can face whilst growing up.

Young people are affected by a variety of issues that affect the way that they think, feel and behave. Over the last 27 years, the Charity has adapted to meet young people’s changing needs, from the kinds of issues normally associated with being a teenager such as bullying or worrying about your appearance, to more prevalent modern themes such as gang violence and online bullying over social media platforms.

John Lyon’s Charity is keen to support projects and initiatives that work to educate young people over the importance of understanding how to deal with various crises and helping them get through situations that they find themselves in. These projects are sometimes funded through schools, but often are better dealt with in less formal settings such as youth clubs. These issues include, but are not limited to:

Have a look at some of the case studies below for insight into some of the Youth Issues projects funded by the Charity. Alternatively, you can visit our page on Recently Funded Projects.

One of the first posts the Harrow Law Centre created was that of a young persons’ solicitor, as this group often do not access advice and as a result do not receive the full services they are entitled to. The project not only provides legal advice to young people (aged 14-25), but also brings them into the sphere of the Law Centre. This means the centre can better understand young people’s needs, better direct their services/skills towards them, and creates more opportunities for young people to provide input to the law centre and its policies.

In 2017, Harrow Law Centre was selected to receive a promotional film about its work as part of the JLC Volunteer Films initiative in partnership with Media Trust. 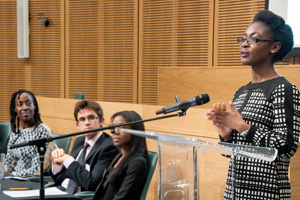 Brent Community Law Centre (BCLC) was established in the early 1970’s and was the first publicly funded law centre in the country. It was established to plug the gap in provision of legal advice and representation for those who cannot afford to pay for a solicitor, and also to focus legal skills and knowledge on community needs. The Law Centre seeks to empower the community to achieve their outcomes though negotiation and persuasion rather than rush matters into court. It advises over 5000 clients a year.

The Young People’s Law Centre has now been open for one year, and has seen great success. The newly recruited coordinator has made excellent connections with local youth groups and council services, including several senior councillors who are very supportive of the project. The Young People’s Law Centre is attracting young Twitter and Facebook followers and has an interactive website designed by media students at the College Of North West London. Good links have also been established with the College, who are filming a series of web tutorials on legal matters for young people.

This Centre is the first of its kind in the country and has attracted attention from the Law Centre Coalition.   Similar centres are now being set up in other boroughs, including Harrow. The project is in its very early stages and we look forward to see how it develops. 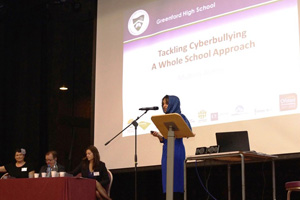 Specialist staff tackle the topic of cyber-bullying during assembly

There is a growing focus on the need to safeguard young people from the ever-changing risks emanating from new technologies and the unregulated nature of the internet. Risks include inappropriate contact, content and conduct and include grooming, cyber-bullying and online sexual exploitation. In the autumn of 2012, all Ealing schools completed an audit, through the Ealing Safeguarding Children Board (ESCB) which highlighted a significant gap in provision, knowledge and skills across the borough, with secondary schools most in need of guidance and support. The E-Safety initiative aims to introduce an inclusive programme for high schools to address this gap through an extensive training and development programme designed by Greenford High School in line with Ofsted and ESCB recommendations.

The Charity’s grant of £114,000 over three years has enabled Greenford High to build a sustainable infrastructure and share good practice on e-safety across three Ealing high schools. Partner schools in the project are Feathersone High School, Ellen Wilkinson School for Girls and the Cardinal Wiseman Catholic School. The secondary schools cascade the programme to their own partner primary school: Ravenor Primary, Lady Margaret Primary and Allenby Primary.

An intrinsic part of the project is the training of peer mentors across the schools, which has proven to be highly successful. At the end of the first year, there was a conference about e-safety which was attended by each of the participating schools and there is now a waiting list of schools who wish to take part. 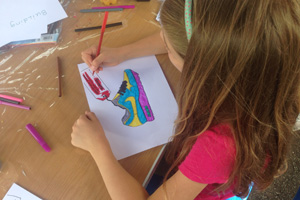 Art Against Knives (AAK) was established in 2008 after the unprovoked stabbing of Oliver Hemsley, a 21-year-old student from Central Saint Martins College of Art and Design. The attack, which took place in Shoreditch, has left Oliver in a wheelchair. AAK was initially an exhibition organised by Oliver’s friends and fellow Central Saint Martin’s students to raise money and awareness a year after he was attacked. The event gained support from some of the biggest names in art and fashion with work donated by Tracey Emin, Rankin, Antony Gormley, Tim Walker, Christopher Kane and Banksy. The event commenced a dialogue within London’s creative communities and the charity was established as a result. The organisation now works with at-risk young people in Hackney and Barnet affected by knife crime and facilitates creative opportunities to help them secure employment, education or training.

In 2014 John Lyon’s Charity awarded AAK a grant of £30,000 per annum for three years towards the Creative Collaborations programme. Creative Collaborations is a programme of on-going, intensive outreach work and a series of one-off projects co-produced by hard to reach young people in areas of high deprivation. Each project has a unique purpose and is tailored to meet the needs of the individual or group.

The three main strands are; In our Hands, a community based project working with young females to prevent them from becoming victims and perpetrators of violent crime; The Role Models, a tailored programme of mentoring for individual needs; and Word Forward, training in writing and performance skills for songwriters, musicians and spoken word performers.

Participants are guided through the creative process, gaining insight into the professional industry and the opportunity to gain transferable skills ready for employment. The programme focuses on three areas in Barnet: The Grange Estate, Strawberry Vale Estate and Grahame Park Estate.