Since 1992, John Lyon’s Charity has awarded over £21 million to support youth clubs and facilities across the Beneficial Area, providing recreational safe-spaces for young people of all ages to prosper, build relationships and learn essential life-skills.

We understand that youth clubs exist in a particularly challenging environment:

With the Charity’s help, many youth clubs throughout the nine boroughs in the Beneficial Area are thriving and delivering high quality, innovative youth work to vast numbers of young people. The Charity will support:

Have a look at some of the case studies below for insight into some Youth Clubs & Youth Activities funded by the Charity. Alternatively, you can visit our page on Recently Funded Projects.

Based in Barnet, Afghan Association Paiwand is the leading Afghan-led organisation in the UK.  Having achieved the ‘Special Distinction’ Award from the National Resource Centre for Supplementary Education, it is recognised as one of the best supplementary schools in the country.  Paiwand delivers a variety of services to all communities throughout North London, including three supplementary schools, ESOL classes, mentoring, advice and guidance and numerous social, cultural and sporting activities. Paiwand also operates two buildings that provide support and sheltered accommodation for unaccompanied minors.

The charity has been granted a total of nearly £260,000 by John Lyon’s Charity since 2010. Primarily supporting the supplementary schools, Paiwand helps disadvantaged pupils to reach high quality educational outcomes, something which is critically important to ensuring that young people have good life chances and choices in the future. Its community has grown to over 2,000 people who have come from all over the world.

In 2017, Afghan Association Paiwand was selected to receive a promotional film about its work as part of the JLC Volunteer Films initiative in partnership with Media Trust.

From its base on the Regent’s Canal, Pirate Castle provides a variety of water and land-based activities for children and young people (aged 8-16) afterschool, during weekends and during school holidays. Pirate Castle strives to tackle disadvantage, challenge exclusion and support the more vulnerable members of the community. The organisation has had one of the longest relationships with the Charity, having received £315,000 since 1992.

Its raft of adventurous recreation (canoeing, kayaking and canal boating are its core activities), outdoor education and training initiatives enhance health and wellbeing, nurture life and social skills and bring people together through active participation – regardless of their ability or personal circumstances. With a focus on young people, it also partners with mainstream and specialist schools, Pupil Referral Units, frontline and voluntary support services to deliver projects that support the curriculum, help address damaging behaviours or improve young people’s health and long-term life chances.

In 2017, The Pirate Castle was selected to receive a promotional film about its work as part of the JLC Volunteer Films initiative in partnership with Media Trust. 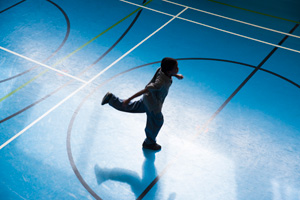 Samuel Lithgow Youth Centre was established in 1969. It is located at the heart of the Regent’s Park estate and serves the whole of the West Euston area. After extensive fundraising (including £70,000 from John Lyon’s Charity) a brand new centre was inaugurated in January 2010. The current centre is state-of-the-art and one of the best equipped youth centres in Camden. Since 1994, the Centre has received £176,900 from John Lyon’s Charity towards capital and core costs.

Since its refurbishment, Samuel Lithgow Youth Centre has had a profound impact on the Regent’s Park area, one of the most disadvantaged in Camden. Its main services target disadvantaged young people aged 4-19 through two different youth clubs providing activities five days a week, as well as an after-school club. It also offers supporting activities to lone parents and under 5s, the unemployed, BME groups and women. The youth club has 780 active members and the Centre is always buzzing with youth people attending a variety of activities throughout the day. The Centre has an excellent reputation for the quality of its work and was the first youth club in London to achieve London Youth’s Gold Award for youth work.

Refugee Youth is a pioneering youth organisation that works with young refugees throughout London. It runs a very successful youth club in Harrow, Mustaqbal, which was set up by a group of young Somali women to fill a gap in current provision. The group is now mixed, with membership from a range of communities. The Club provides a variety of activities including film and debate nights, healthy eating and nutrition and wrestling coaching by the only professional Somali WWE wrestler!

Refugee Youth has also been working with Chalk Hill Youth Forum in Wembley to set up a summer scheme project working with young people who live on the Chalk Hill Estate. Since 2008, John Lyon’s Charity has awarded them grants totalling £74,000.