We believe that the Arts are a ‘good thing’ and contribute to a well-rounded education. Over the past 30 years this sentiment has been reflected in the Charity’s giving, with Arts & Sciences consistently remaining the highest area of the Charity’s spend, totalling more than £25 million to date.

The Charity’s Beneficial Area contains an extraordinary number of world class Arts & Science venues and establishments. However, visitor numbers amongst young people from the Charity’s Beneficial Area, including school groups, are lower than visitors from elsewhere.  We work with these institutions to find strategies and develop engagement activities that target schools, young people and their families to help them take an active role in these Arts venues that are on their doorstep. Over the years, grants have been awarded to the Institute of Contemporary Art, Victoria & Albert Museum, Shakespeare’s Globe and the National Portrait Gallery, to name a few.

The Charity will not consider requests from music organisations that do not complement the delivery of the local Music Hub.

Have a look at some of the case studies below for insight into some of the Arts & Science projects funded by the Charity. Alternatively, you can visit our page on Recently Funded Projects. 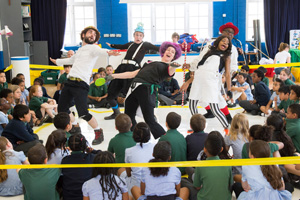 In 2011, John Lyon’s Charity supported the Royal Court to extend the Young Writers’ Programme to younger age groups and to establish links with local primary schools. This has had much success and has influenced the complexion of young people at the Court. We have recently extended this commitment with a grant of £100,000 over the next three years towards the Primetime initiative for primary schools throughout the Charity’s Beneficial Area.

Primetime is a new initiative created to benefit schools that have limited engagement with arts education projects. Each year, over the summer, Primetime  tours to 15 schools. Each school receives a performance followed by a taster playwriting workshop. In the autumn, young people from those schools take part in a playwriting group, working with a Royal Court playwright. The tour of Primetime consists of 10 plays written by the school children, aged 8-11. Each year the tour will consist of plays written by the previous year’s cohort and performed by professional actors.

Find out more about on Primetime, please click here. 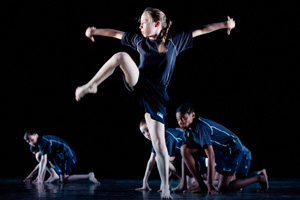 In 2014, John Lyon’s Charity supported English National Ballet (ENB) to deliver an ambitious project in two secondary schools: Capital City Academy (Brent) and Hammersmith Academy (Hammersmith & Fulham). Dance Journeys was inspired by Lest We Forget, the collaboration between ENB and Akram Khan Company to commemorate the First World War. Students from the two schools worked with dancers from both companies towards a performance on the main stage at the Barbican. The project was ambitious in the level of commitment required by participants. Sessions were delivered weekly and students had to commit to two weekend rehearsals. The resulting performance at the Barbican was mesmerizing and full of emotion.

ENB has repeated the Dance Journeys project every year since, increasing the number of participating schools and incorporating wider aspects of ballet production, including sound, video and backstage work. The students also have the opportunity to work with ENB Young Company towards a ‘Curtain Raiser’ performance before a ‘matinee takeover’ performance at Sadler’s Wells, performing alongside the ENB Youth Company, ENB School and its main professional company.

Find out more about the English National Ballet. 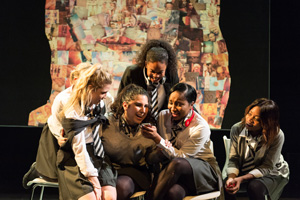 Synergy was founded in 2000 and provides theatre performance opportunities to prisoners, ex-prisoners and youths at risk. Its work aims to aid rehabilitation and resettlement, reduce offending and support continuing personal development of hard to reach and vulnerable young people.

To date, we have awarded Synergy £120,000 and are currently contributing £20,000 per year towards the education programme. This aims to engage the young people who are most at risk of entering, or have already entered, the criminal justice system through high quality, theatre-based activities. These are delivered by professional practitioners and trained ex-prisoner facilitators whose first-hand experience of the consequences of criminal activity helps inform the work.

Four bespoke programmes were offered in the Charity’s Beneficial Area in 2013-14. Participants include those at risk from offending, from inner-city schools, PRUs, ex-prisoners and those referred from Youth Offending Teams. The wider education programme reaches over 3,000 young people each year through annual touring productions, workshops and longer-term creative projects with specific high risk groups exploring crime-related themes. Through powerful, high quality and culturally relevant theatre-based activities, often performed and facilitated by ex-prisoners who speak honestly about their experiences and regrets, projects offer a powerful deterrent in terms of deglamourising crime and challenging the kudos of criminal behaviour.